Expo centre on track for opening this year 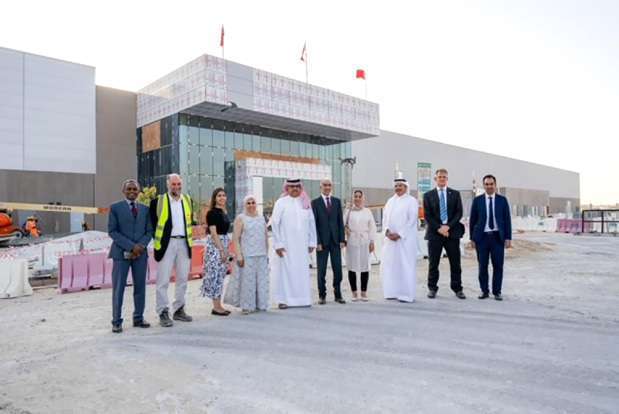 The $221.7 million new exhibition and convention centre in Sakhir is well on track for a grand opening later this year, according to the Works Ministry.

Exhibition World Bahrain, the largest venue of its kind in the region, has been hailed as an important component in achieving the goals of Bahrain’s 2022-2026 tourism strategy.

With more than 75 percent work on the project completed, officials from the Tourism and Works ministries visited the site yesterday to oversee the progress of the construction.

“The new centre will contribute a great deal to the nation’s economy and will solidify Bahrain as an attractive spot to do business,” said Works Minister Ibrahim Al Hawaj.

“The centre is being constructed on par with Tourism Ministry specifications,” he added.

Much of the centre has already been completed, with concrete work including pre-cast concrete walls all done.

Ongoing parts of the construction include aluminium panelling for the walls and steel panelling and insulation for the ceilings.

“Parts of the project that have reached advanced stages include the construction of internal roads, pavements, and drainage networks for sewage and rainwater,” said the minister.

“Electric and mechanical works, along with the finishing works and tree planting are also almost done.”

Meanwhile, Tourism Minister Fatima Al Sairafi said that she was pleased with the progress on the centre and glad that the work was proceeding smoothly and as planned.

“Exhibition World Bahrain will help achieve Bahrain’s ambitious strategic tourism goals for the years 2022-2026, which were set as part of the national Economic Recovery Plan,” she said.

“It will be a great pillar for the country’s tourism and hospitality industries and will act as a boost to industry and commerce.

“A centre like this will be great for diversifying Bahrain’s economy and creating new opportunities for investment.”

Ms Al Sairafi also stated that the centre will increase Bahrain’s competitiveness on a global level, and raise the number of conferences and conventions held in the country.

The contractor in charge of actual construction is Cebarco Bahrain.

In May, the GDN reported that as many as 300 new jobs will be created once the new centre is running at full steam following its opening in the fourth quarter of this year.

Sitting on a total area of 309,000sqm, the centre located west of the Bahrain International Circuit is set to bolster Bahrain’s position as a leading business events hub internationally.

With 95,000sqm of exhibition space over 10 halls, a 4,000-seat tiered auditorium, 95 meeting rooms, Royal and VIP majlis and a 250-seat restaurant, the centre can host a range of events from exhibitions and conventions to concerts, live events, weddings and seminars.

A string of hotels, entertainment and leisure facilities, restaurants, and retail and residential components will be built around the area.