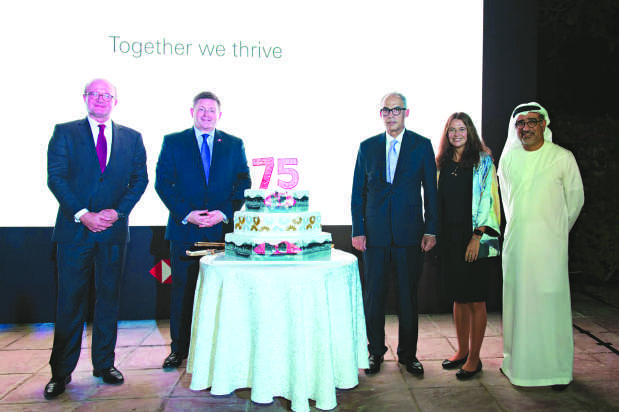 The event was attended by more than 150 guests including customers, ministers and senior officials.

Melika Betley, chief executive of HSBC Bank Middle East Bahrain said: “Not only are we celebrating 75 years of our successful business in Bahrain, but more than that, we are celebrating a vision that became a reality.”

“It was the vision and ambition of the late Shaikh Salman bin Hamad Al Khalifa that laid the foundations for growth, opportunity and development in Bahrain and one of my predecessors, Vyvian Walter, who created a banking presence for us here in 1944 that over the many years since has helped the vision to become a reality.”

Martin Tricaud, HSBC Group chief executive for the Middle East, North Africa and Turkey, said: “HSBC has been proud to support Bahrain’s development across the decades and we look forward to continuing to do so. By connecting Bahrain to our international network, we are able to give customers direct access to 95 per cent of the world’s GDP, trade and investment flows.”

Mr Drummond said: “The embassy is delighted to host our friends from HSBC on this very special anniversary and 75 years is a huge achievement. HSBC is of course one of the strongest and internationally focused bank and financial services companies operating out of the UK. Financial services is a key element in growing trade and investment between Britain and Bahrain, and I expect HSBC to play a large and dynamic role for at least the next 75 years in developing productive partnerships between Bahrain and the UK.”

As a mark of HSBC’s commitment to community engagement throughout its 75 years in Bahrain, the bank has donated a care package to the Migrant Workers Protection Society in the name of each guest in attendance at the celebration.